The radio tower restaurant and the viewing platform are closed for the winter.

The radio tower restaurant and the viewing platform will initially remain closed until March 31, 2023.

Unfortunately, we are not available for you by phone during this time.

If you have a request for an exclusive event, please write to us at funkturm@capital-catering.de.

We ask for your understanding and hope to be able to welcome you again as our guests in the Easter season.

Of course, all vouchers that have already been issued remain valid.

Sincerely yours
Your radio tower team

An outstanding culinary experience and a magnificent view

An interior that matches the original art nouveau design, a uniquely spectacular view of Berlin’s rooftops and a menu that caters to discerning tastes – that is a combination which only the Funkturm Restaurant can offer. Inside the 55-metre high restaurant guests can dine à la carte and enjoy a buffet which has a different theme every month. Naturally, dishes are made from fresh, quality ingredients only, and the service is friendly and professional.

The Funkturm Restaurant seats up to 116 guests. With its nostalgic ‘twenties’ atmosphere it provides the perfect setting for private and exclusive celebrations and business events. The interior features panels from Caucasian nutwood, artfully crafted inlays and a slatted white ceiling, providing a historical and stylish ambience that is ideal for even the most prestigious events.

Visit the Funkturm Restaurant and enjoy the experience with all your senses. A panoramic view of Berlin

Spectacular views as far as the eye can see. On the Funkturm’s observation deck visitors can enjoy the experience protected behind glass walls or out it in the open air. In both cases a spectacular view of Berlin awaits them. Be it the Exhibition Grounds, Teufelsberg and Olympic Stadium to the west, the Fernsehturm (TV Tower) and Gedächtniskirche (Memorial Church) to the east – visitors can discover many landmarks looking out from the 126-metre high observation deck.

Diagrams reproduced to scale provide easy navigation for visitors. Using coin-operated telescopes visitors can take a closer look in every direction at attractions as well as the countryside around Berlin. The ascent in the glass-walled lift takes exactly 33 seconds, equivalent to 4 metres per second. The observation deck has a maximum capacity of 45 people.

Important! Depending on weather conditions the observation deck may close at short notice. Please call +49 (0)30 3038 1905 on the day you intend to visit to find out whether it is open. The radio tower restaurant and the viewing platform are closed for the winter.

The radio tower restaurant and the viewing platform will initially remain closed until March 31, 2023.

Unfortunately, we are not available for you by phone during this time.

If you have a request for an exclusive event, please write to us at funkturm@capital-catering.de.

We ask for your understanding and hope to be able to welcome you again as our guests in the Easter season.

Of course, all vouchers that have already been issued remain valid.

Sincerely yours
Your radio tower team

During trade fairs or other events access to the Funkturm may be limited or granted only if a ticket has been purchased to the event in question. You can find individual trade fair dates here: Calendar of Trade Shows

During the summer months the observation deck and restaurant are closed for several weeks to allow maintenance work to take place. If you are planning to visit the Funkturm during the period from July to September please phone in advance for information on opening times. Fone +49 (0)30 3038 1905 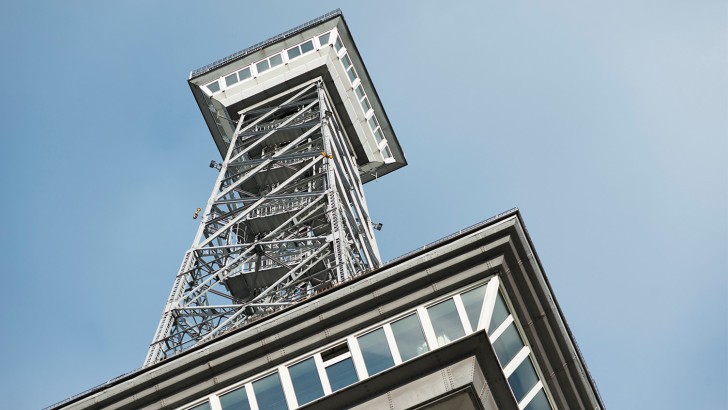 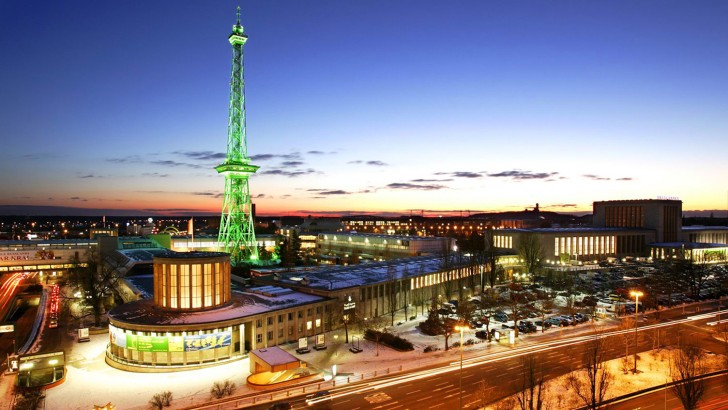 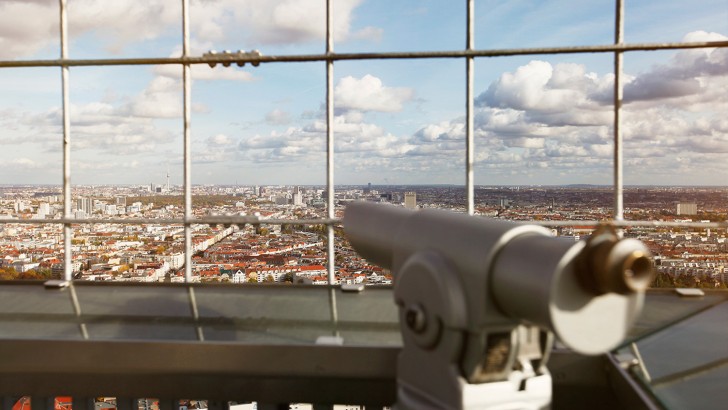 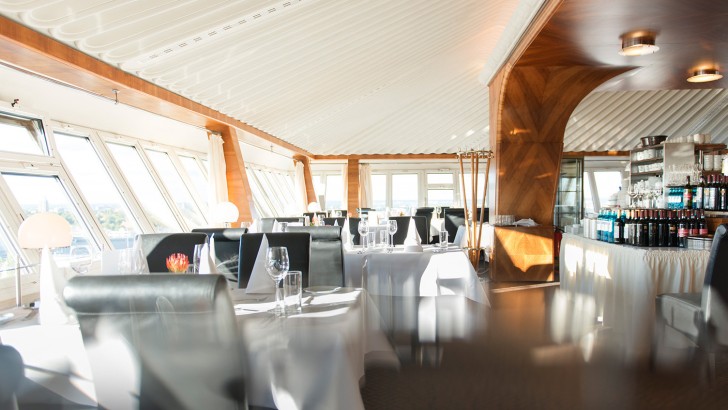 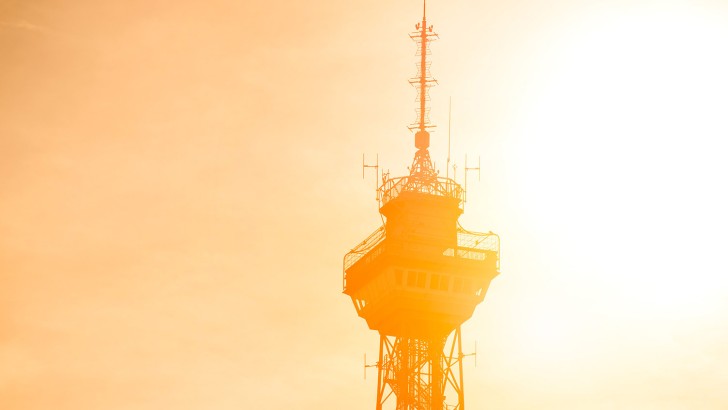 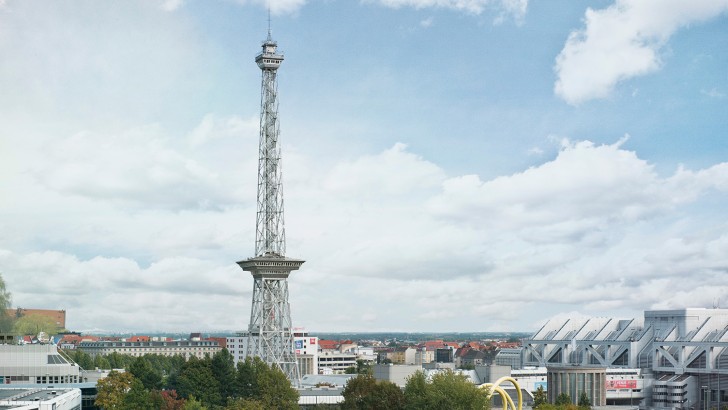 Measuring a total of 147 metres in height the Funkturm is a landmark and attraction for tourists and Berliners alike. Every year, many thousands admire the panoramic view from the observation deck and enjoy the culinary delights served by the Funkturm Restaurant. Ever since the Funkturm was inaugurated on 3 September 1926 more than 17 million people have looked out from the ’beanpole’ onto the Berlin Exhibition Grounds, the neighbouring woodland areas, lakes and many buildings of the capital.

In 1966, due to its architectural and historical importance, the Funkturm acquired the status of a listed building. The 400-tonne steel structure has served as a broadcasting tower, a navigational aid for aviators and has been used for advertising. In 1929 it broadcast Germany’s first televised images and in 1935 the world’s first regular TV programme, thus writing itself into the history of technical progress. For many, it gained a political status and symbolised a beacon of freedom during the Cold War.

From aerial mast to landmark of the German capital

The Funkturm – a tale of sadness and joy
The sun shines brightly on inauguration day
Alfred Braun holds the inaugural speech
The aerial mast becomes a tower
Breaking new technical ground
An aerial mast and tourist attraction – a beacon and advertising hoarding
The Funkturm welcomes its 500,000th visitor as early as 1928
A garden for the Funkturm
The first televised images
Albert Einstein visits the Funkturm
The exhibition grounds expand around the base of the Funkturm
A fire rages on 19 August 1935 – the first scars
The Funkturm barely escapes the war – more scars
Refurbishment and a new look
The Funkturm becomes an attraction, replacing its broadcasting function
Spectacular looks, even now – just like in the twenties

Our staff will be happy to take your reservations

Facts, figures and information on the Eiffel Tower’s 'little brother'

The Berliner Funkturm is owned by the Land of Berlin. The company operating it is Capital Catering GmbH, a wholly-owned subsidiary of Messe Berlin GmbH.

The architect responsible for designing the Funkturm was Prof. Heinrich Straumer. He supervised a total of 140 technical drawings of the steel framework. His design was based on the Eiffel Tower in Paris.

Construction began on 8 November 1924. On 3 September 1926, barely two years later and at the opening of the 3rd Radio Exhibition ('Grosse Deutsche Funkausstellung'), the Funkturm was inaugurated.

The Funkturm weighs atotal of around 600 tonnes, with the steel structure accounting for 400 tonnes and the foundations making up another 220 tonnes.

The load-bearing capacity of each of the porcelain insulators installed on the foundations is 1.4 million kilogrammes.

The lift can carry up to ten people and reaches the observation deck in 33 seconds, travelling at 4 m/s. The lift is operated by a remote radio-controlled system. Its design was specially commissioned and is similar only to the system which operates in the Eiffel Tower in Paris.

The restaurant seats a total of 116 guests and is located 55 metres above ground. Its design is from the art nouveau era. Even now, the interior radiates an atmosphere that harks back to the twenties. The wall panels from Caucasian nutwood, the slatted ceiling in white as well as the bar, fashioned from high-quality wood and mother of pearl, are all unique. The painstakingly crafted panels are the work of Ludwig Lüdtke. They include inlay designs by Victor Lurjé, who belonged to the renowned Vienna Workshops.

After the Second World War, and in coordination with the Berlin Department of Listed Buildings, the restaurant was refurbished according to its original design. The inlays were restored by Fritz Huppke.

Since the Funkturm’s inauguration in 1926 a total of more than 17 million people have visited the restaurant and observation deck. In recent times the figure has been around 60,000 a year.

Illumination of the Funkturm | lighting system

State-of-the-art LED lighting systems illuminate the Funkturm on the Berlin Exhibition Grounds. A computer mouse click selects the desired colour for lighting up the landmark, as befits the occasion.

The lighting system comprises 68 LEDs with a power input of 9.5 kW. Their life cycle exceeds 50,000 hours. LED lighting is installed in the courtyard of the Funkturm, on the roof of the restaurant, the observation deck, as well as on the structure’s steel frame.

Some of the Funkturm illumination’s most spectacular visual effects include waterfalls, flames and rainbows. Furthermore, each of the major trade fairs features its own colours whenever the Funkturm is illuminated, highlighting the event’s presence from afar. Thus, traditionally the Funkturm shines in red during IFA, in orange during ITB, in blue during InnoTrans, in yellow during Fruit Logistica, and naturally in green during the International Green Week.

On the website of Capital Catering GmbH you will find press releases, photos and logos for your work. Please feel free to contact us if you require additional information.